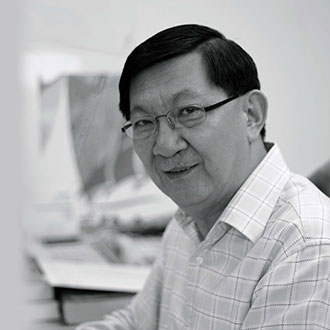 As an architect, you have to walk the site, understand the genius loci, the environmental issues, the cultural impact.

Holding that architecture is ultimately a service industry, Mr Chan Sui Him has successfully led a wide and complex range of projects, from community-scale to large, urban-scale projects.  These include the Singapore SAFTI Military Institute, Singapore Aviation Academy and the commercial One Marina Boulevard, all of which were design projects won through competitions.  Residential, commercial or institutional, across his projects, Mr Chan displays a keen understanding of the social and economic factors impacting the project.  The result is designs of unyielding quality, articulation and sensitivity towards its purpose, function and user-groups.

Throughout his years of service, Mr Chan remains passionate about his role in the architectural profession and the cultivation of young minds for the industry.  A firm believer in the enduring progression of the practice, he has taken on a range of roles that allow him to be an architect of change.  He was a pioneer Fellow member of the Singapore Institute of Architects (SIA) and a member of the Design Advisory Panel for Urban Redevelopment Authority (URA) in his early years.  From April 2006 to March 2015, Mr Chan was also a Board Member of URA and sat as President on the Singapore Board of Architects from January 2001 to December 2009.

An advocate for advancing education and nurturing the talent pipeline, he served as Chairman of the School Management Board of Anglican High School until 2007 and was also Chairman of the School Advisory Committee in NUS – School of Design and Environment.  Acknowledging his years of service, he was awarded the Public Service Medal in 2006.  Then, in 2015, Mr Chan was presented with the Singapore Design Golden Jubilee Award in 2015 by SIA for his invaluable contribution to the built environment of Singapore and the architectural fraternity.

Today, Mr Chan continues to be a role model for the future generation of architects. A Senior Director at DP Architects, he actively shares his experience and knowledge, effectively mentoring our architects and their design teams.  To date, projects in which he has provided design direction and guidance to include: Downtown East, Singapore Chinese Cultural Centre, Our Tampines Hub, Punggol Town Hub and two other major social community and sports complexes.